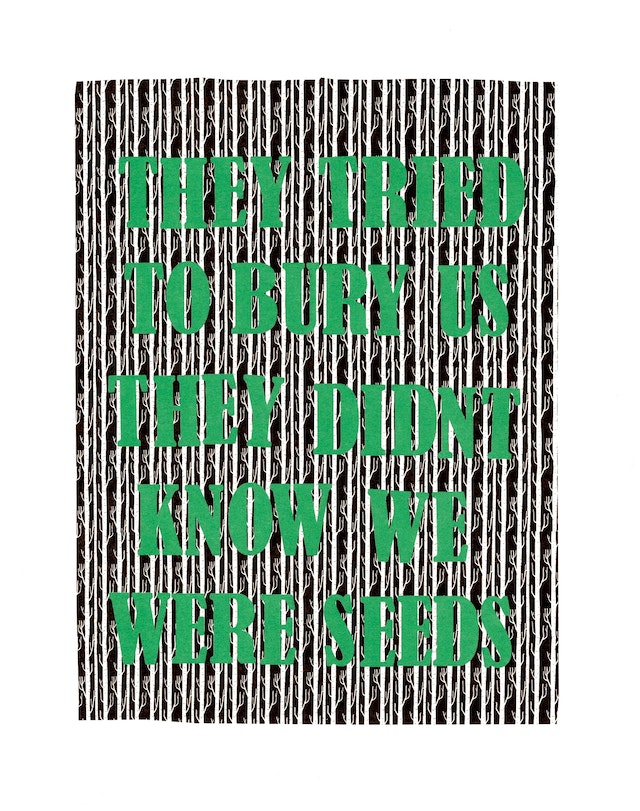 They Tried to Bury Us

“This is one of the first and most popular banners made for the Protest Banner Lending Library, where Aram Han Sifuentes has been facilitating free and public protest banner making workshops and runs physical lending libraries of donated protest banners since 2016. More than 3,000 banners have been made in workshops, and there are Protest Banner Lending Libraries in cities all over the United States and Canada that house around 600 banners. It is an ongoing project where banners are constantly circulating, being checked out, used, and returned. This print is a collaboration between Han Sifuentes and Walls Divide Press.”

Aram is a 2016 Smithsonian Artist Research Fellow, 2016 3Arts Awardee, and a 2020 Map Fund Grantee. Her project, Protest Banner Lending Library, was a finalist for the Beazley Design Awards at the Design Museum (London, UK) in 2016. She earned her B.A. in Art and Latin American Studies from the University of California, Berkeley, and her M.F.A. in Fiber and Material Studies from the School of the Art Institute of Chicago. She is currently an Adjunct Associate Professor at the School of the Art Institute of Chicago, and the 2020-2021 Artist-in-Residence at Loyola University Chicago.