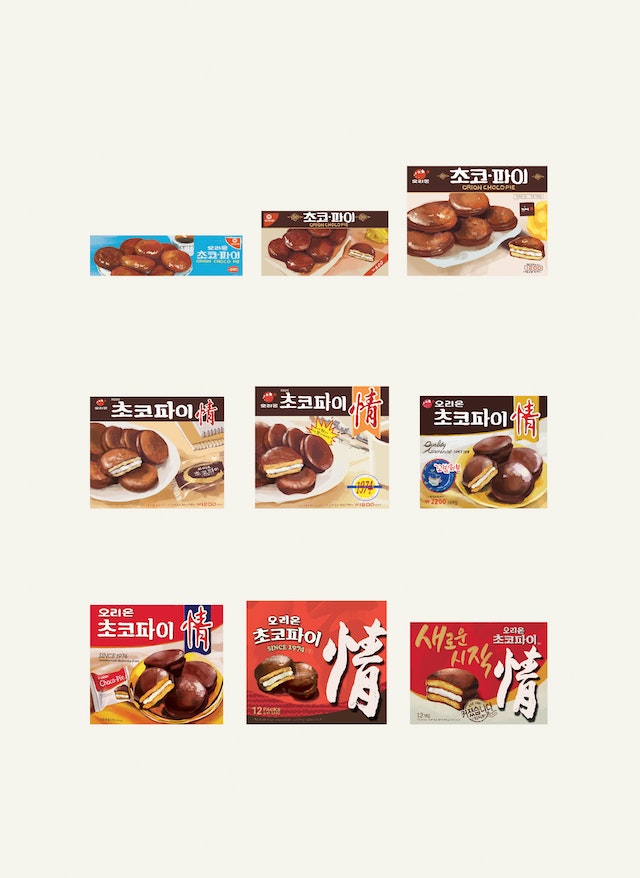 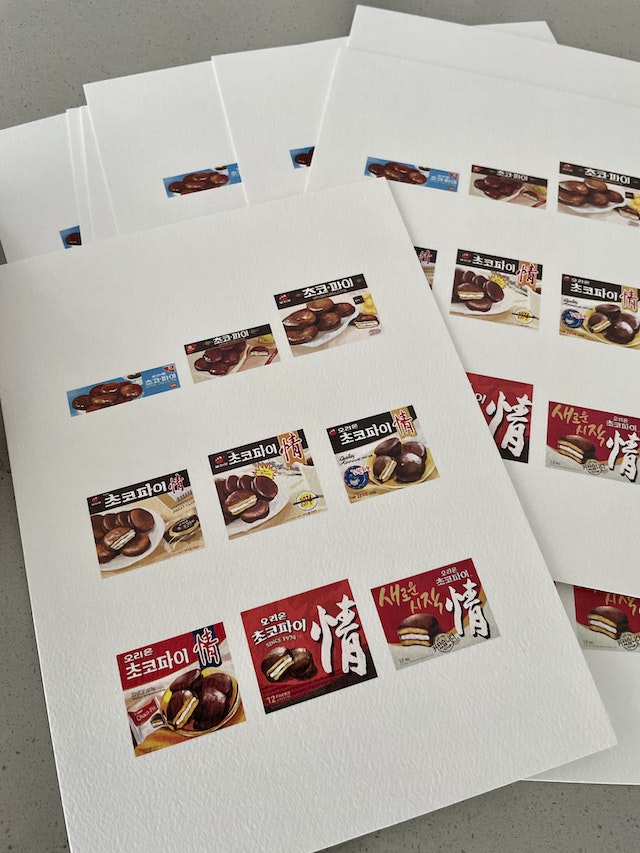 “The Choco Pie is arguably the most recognizable “Korean” snack. I grew up with Choco Pies. The mouth-watering fluffy chocolate buns filled with even fluffier marshmallow-like cream in between those dreamy buns...! I grew up eating it, loving it, and thinking that “giving and sharing Choco Pie is more than just simply sharing snacks—sharing a Choco Pie, that is saying something.” This is because of a very successful marketing campaign created by the manufacturer Orion company in 1989.

“Since the word “Choco Pie” isn’t copyrighted, many different Korean snack companies tried to come up with products that featured the exact word, “Choco-Pie.” The Orion company wanted to stand out from this competitive market and decided to add the idea of “JEONG” into the product name. Not only did they add the Chinese character “jeong 情” in the front graphic, but they also emphasized the idea of “jeong” in convincing commercials, for example, with an army soldier sharing Choco Pies with their fellow comrades, or a child sharing a Choco Pie with a fellow school student he has crush on. The company successfully manipulated Koreans to feel good about themselves when they purchased Orion’s Choco Pies.

“I digitally painted these different versions of Orion’s Choco Pie products from the 1970s, 80s, 90s, early 2000s, to 2010, and today—and found it fascinating to see how the sizes and numbers of the Choco Pies on the box got smaller while the character “jeong” got bigger. On the most recent box of Choco Pie, the “jeong” character is almost half the size of the box, with a single isolated Choco Pie cast into its shadow.

“It’s almost as if you no longer have to share a Choco Pie to feel “jeong,” and can simply purchase a box of Choco Pies to understand what “jeong” means; the act of purchasing a Choco Pie automatically validates that you “get it.” Why does this Jeong marketing appeal to Koreans? Is Jeong lacking in our culture and are we desperately trying to purchase it?

“Maybe we need practice in communicating this feeling of gratitude, appreciation, and love. Maybe we need this product to symbolize our feelings. The Orion company allows us to share complex feelings by simply sharing a Choco Pie with someone who’s special to us. Have Choco Pies helped us learn to express ourselves? If we’re able to recognize and communicate “jeong” in our lives, then I think yes.”

Eunsoo Jeong is a Los Angeles-based Korean-American artist and creator of Koreangry, a comic/zine series based on her daily struggles as an immigrant woman searching for her identity in today’s political climate. Born in South Korea, she immigrated to San Francisco at age 13. After attending the Animation/Illustration program at San Jose State University, she headed down to Los Angeles to pursue her career in the animation industry. She has worked as a color artist on multiple projects at Nickelodeon Animation Studios and Dreamworks TV. Her miniatures often include recycled materials, scraps, and found objects—where she finds the imperfection and grimy nature of the materials to reflect the smutty content of her work.